bull’s eye on the target. You can propel the stones along the floor by

hand, or by specially designed pusher or by using a ramp if sitting down

to play. The game can be played in singles, in pairs or by a team of four.

One team will have red stones and the other blue. Various strategies are

used to win each ‘end’ and the score is cumulative. The game is played

on a area the size of a badminton court. This has quickly become a

popular sport and now disabled people can play with or against

to a demonstration event and got the bug.

They received funding for the equipment necessary and it has taken off from there. In 2008 Blind Life in Durham joined GBKA (Great Britain Kurling Association). Every year the GBKA hold competitions which are open to all member groups. As a member, Blind Life in Durham attends and have been fairly successful over the years.

​We use a number of venues all of which are wheelchair accessible and they cater for disabled people.

On Sunday 20 October we held our Annual In-House Competition.  They all played each other and then 8 people went on to the quarter finals until there were just two left for the final.  It was father playing daughter and the daughter won.  The winner was Gemma Marshall, 2nd place was Andy Marshall, 3rd was Margaret Blythe and 4th David Wardle.  The most improved player and recipient of the Margaret McCance Cup was Elaine Davison.  The year there was also a new Paul Boughey Memorial Cup which was for the winner of the most points scored in the summer season.  The winner was Colin Welch.  Congratulations to everyone.

Over the weekend of 5 and 6 October, some members of Blind Life went to Bridlington to take part in the Team Competition on the Saturday, and entered two teams.  On the Sunday, it was the Singles and 8 members took part.  It was a successful weekend with Team 1 coming 1st in the Consulation Round on the Saturday.  On the Sunday, Colin Welsh came 1st in the Main Round, David Wardle came 1st in the Consulation Round and Elaine Davison came 4th.

Over the weekend of Saturday 4 and Sunday 5 May, the GBA World Championships took place in Darlington.  In total, 11 people from Blind Life in Durham entered over the two days.  On Saturday was the Pairs Competition where Colin Welch and Margaret Donald came 2nd in the main competition and were presented with their trophy by Gill Gibbs.  On Sunday in the Singles, David Wardle was Runner-up in the Consolation Round and had his trophy presented by Vivienne Davies.

In October we held our annual In House Kurling Competition, where everyone in a group of four plays each other in a round robin and the two top scorers in each group goes onto the next round until finally there is one winner and one runner up.  This year the trophies were presented by Leita Prior from County Durham Talking Newspapers, who was amazed at the turnout and the kurling itself.

The winner was David Wardle and runner up was Elaine Davison.  Another award was made to Margaret Blyth who won the Margaret McCance Cup for most improved player.  Well done to everyone.

​Over the weekend of Saturday 26 and Sunday 27 May 2018, the Great British Kurling Association (GBKA) held the World Championships at Newton Aycliffe Leisure Centre.  On the Saturday was the Pairs event and Sunday was the Singles.

Blind Life in Durham entered 4 teams in the pairs and 7 members in the singles.  3 of the players had never entered a GBKA competition before.  In the pairs, one team came 4th in the main championship and both players received medals.  Two teams went through to the consolation round and ended up playing each other in the final! So one team was the winner and one team was the runners up, and both teams received trophies.  The winning team also received a new trophy in memory of Nick Gibbs who was a founder and secretary of the GBKA, the Nick Gibbs Memorial Trophy.

On the Sunday in the singles, 4 players went through to the main championship and 2 players came 3rd and 4th overall.  In the consolation round, 1 player came first and received the singles trophy and the Nick Gibbs Memorial Trophy.  All in all we came away with 8 trophies and 3 medals.  Well done to all our players.

Once again the In House New Age Kurling Competition took place in October 2017.  The winner was Eric McCance and runner up was Andy Marshall.

Recently Blind Life in Durham were invited by Equality North East to go to Gateshead Stadium and demonstrate how blind and partially sighted people play New Age Kurling.  Students from around the area were also invited to come and take part.  Everyone enjoyed themselves and a short video was made to show the day. 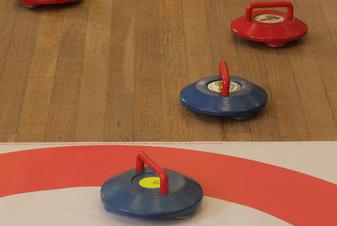 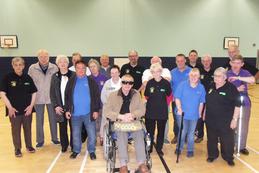 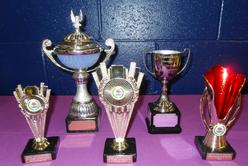 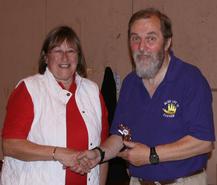 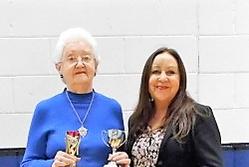 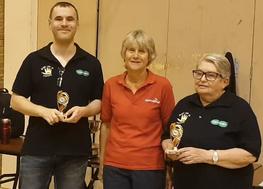 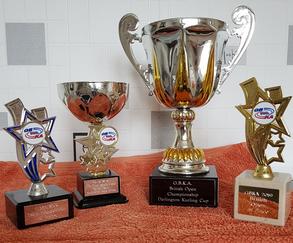 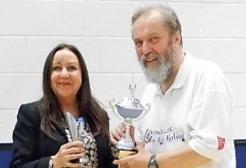 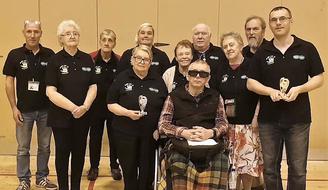