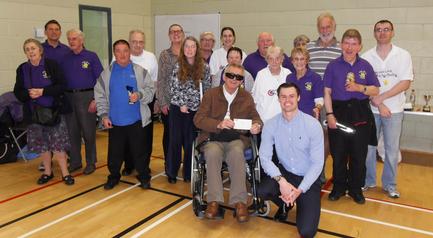 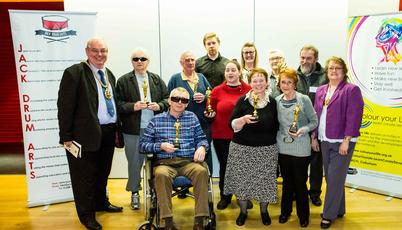 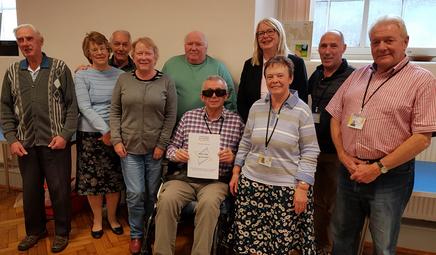 In partnership with the North Pennines AONB Partnership, Blind Life in Durham have produced

an audio tour of Upper Teesdale, which takes you on a journey from Cow Green Reservior down

the river to Low Force.  There are some specific sounds and then information on the sound and

surrounding area.  It lasts for approximately 23 minutes and the feedback from members has been

that they really enjoyed listening to it and were really positive about it.    We hope you enjoy.

“I feel proud when I hear volunteers say ‘my life has changed since I volunteered for Blind Life in Durham, learning new skills and making new friends’.  Volunteers are the vital part of successful charities and having been awarded the Volunteer Kite Mark has made members of the charity proud to receive such an award.

We would like to thank Durham Community Action for awarding us the Kite Mark.”

Charity of the Year

The TSB Crook Branch made Blind Life in Durham, their Charity of the Year for 2015/2016.  At a recent event the TSB Branch Manager, Iain Hindmarsh presented a final cheque to Blind Life in Durham.  Over the year they have raised a total of £681.39.  Thank you.

Below is a picture of Iain Hindmarsh presenting the cheque to Jim Welsh, Chairman of Blind Life in Durham and some members.

Blind Life in Durham celebrates 10 years with a film.  During last year some members of Blind Life took part in a Durham County Council
Adult and Community Learning course with Jack Drum Arts.  With the support of Jack Drum Arts and Ben Race from Capture films and assistance with others like the Heart of Teesdale supported by the Heritage Lottery Fund, our members collaborated to make a short film. The purpose of the film is to raise awareness of living with sight loss to the general public, community decision makers, and service providers.

The film premiere was held on Thursday 29th January at Gala Cinema, Durham City, where there was a lively reception with refreshments afterwards. The audience included the members who collaborated on the film, committee members, local councillors, the Mayor of Durham John Robinson and his wife Maxine, DCC sensory support team members, the Adult Learning team and funders.

The film was introduced by Helen Ward from Jack Drum Arts and Michelle Stone from Adult and Community Learning. They discussed the difficulties faced in producing the film and the inspirational nature of the work. Later Helen said “It was wonderful to be able to premiere the film at the Gala with its massive screen and sound system, and to share the film with a large audience.”

After the film screening people gathered in the studio room to discuss their thoughts and impressions. Barbara Gubbins from County Durham Community Foundation said “It is a very inspiring film and puts life into perspective. The people in the film have overcome many challenges with dignity and humour. Especially humour!”

Members of Blind Life in Durham involved in the film and others involved in the production were presented with Oscars. One of the members said “I enjoyed the evening and was very pleasantly surprised by my Oscar.”

In June 2014, Blind Life in Durham celebrated it's 10th Anniversary of becoming a charity.  During the 10 years, the charity has grown and become involved with New Age Kurling, New Age Bowls, loaning out equipment and a reading group to name but some .

We were one of the Lord Mayor’s Charity of the Year 2012- 2013 whilst Councillor John Wilkinson B Ed (Hons) was Lord Mayor.

This was an exciting time for Blind Life In Durham as it promoted our work for blind and partially sighted people on a larger scale.  We attended many events held by the Lord Mayor and he and his wife attended the launch of our Cookery Book, held at Helme Park Hotel and our Charity Night last October at Bowburn Community Centre.

Cooking Without Looking
Blind Life in Durham (B.L.IN.D) has produced a cookery book for  visually impaired and blind people in large print and audio format.  The Helme Park Hotel, nr Crook, kindly provided B.LIN.D with the room and catering for the book launch on the 24th July 2012. The hotel also  used some of our recipes for the rest of the launch week. A raffle was held for the event, the prize included a copy of our cookery book as well as a pair of oven gloves with fingers kindly  donated by The Oven Glove Company (www.glovebuddies.com )
and a Marmite  gift set. The winner was a member of B.L.IN.D. Musical entertainment at the launch was  provided by Chyrelle Addams a singer who sang a variety of songs from the sixties and seventies- much  appreciated!
​

2010
Blind Life in Durham and the Great North Walk by our Chairman Jim Welch
2010 is the first time I have taken part, the sounds, smells and  atmosphere will be very important to me as I am registered blind. My
experience can then be used to encourage others to try similar events inthe future.Blind Life was started in 2004 to promote active lives for people with visual impairment. The emphasis has always been on what can be achieved not what can not. Myself I was in a wheelchair before quite suddenly going blind. There  were two ways to go: sink into the black depths of depression (which I
could easily have done) or find something I could do which would help  me, my family, and others.

With the help and support of my family and a few others Blind Life was born. I have learned to use a computer since going blind winning learner’s  awards for this, while other members with the group’s encouragement have also completed college courses. We are now building a skype chat group for further socialisation amongst our members. We also hold monthly social meetings, publish a monthly newsletter, have organised trips including short breaks holidays. A New Age Kurling  Group has also been started running successfully for 3 / 4 years, so
well in fact that a group have attended the World New Age Kurling  Championship.

However, we regard it as much a social occasion as a competitive sport. A survey of needs and desires was conducted in 2008 and we continue to  campaign for better treatment for visually impaired people. From access  to support when first diagnosed to longer term help as conditions and  technology changes. Simply having forms from government departments that are accessible to screen readers boosts the level of independence of someone unable to read forms for themselves ( I recently had point out  to a local government department that form specifically directed at disabled people was not accessible – they changed it!) Our part- time admin worker has done the walk for Blind Life for a number of years now (just last year he found out he is now diabetic) andI felt it was time I had a go. New Age Kurling World’s Competition 1st & 2nd May

Survey
During 2008 we not only successfully completed a county wide survey in cooperation with two other charities (see Survey 2008), we also got a CD production facility up and running with funding raised from a  charity New Age Kurling night. This means our monthly newsletter and
other information can be produced on CD, as well as tape and large print. The membership has continued to grow with more taking part in activities like the Kurling and trips to various locations, as well as the monthly social meetings. A number of members successfully completed a 4 day First Aid course, while others completed more coaching to run New Age Kurling. Computer
training continues to play a large part in our planning and development; several members are taking college courses.
Our Chairman received a Community Spirit award at prestigious evening event held at the Radisson Hotel in Durham City.

B.L.IN.D. Awards
As well as forming a New Age Kurling group we have placed various members on a number of different courses to enhance our ability to
support the organisation and each other.This year(2007) B.L.IN.D. have received two awards. One from Durham County Council Access + Awards – a commendation in the small and medium enterprises category ( we were given a star shaped silver paperweight).

The second was from 2D voluntary and community support, for the group constantly striving to promote the physical and mental well being of
members. We also received a silver tray for this. Our Chairman and Vice Treasurer both received awards from 2D as well for their commitment as volunteers with B.L.IN.D.. Jim our Chairman also gained an Adult Learners Award through his computer work.